This is part of our quarterly home performance reporting. All data is posted at netplusdesign.com

Note: I’m 6 months behind in finishing this update. Back dating the post to January 4 when I statrted it.

Last year we had relatively normal usage and rather low solar production. This year we have slightly less than normal solar, but higher usage. The end result is our second net overage in the lifetime of the house.

We produced 5% less solar than average, and used 14% more than average. That tipped the scales once again, just enough to push us into the negative zone. On the long view however, we’ve still generated a surplus of 9,040 kWh over the last 8 years since the house was built.

We were performing fairly normally until September. Let’s break down the numbers.

October through December was also the coldest forth quarter since we started recording temperature data at the house.

Overall, here’s how this quarter and the year compare.

Here’s our progress for the first 8 years in the house.

We were at the maximum range September-December. September was the farthest off from average. I’m going to have to build some better comparison charts to find the largest increased usage.

2019 was our second coldest year in the house, although we continue to see wide extremes in temperature ranges (see temperature ranges below). The ASHP used 29% of the total as opposed to 32% last year. Vampire loads decreased slightly this year. We cooked 1% less in 2019 as the induction cooktop & stove vampire loads increased in comparison to use. The combined vampire load for the stove, ASHP and solar inverter was 141 kWh in 2019, about 11 kWh more than last year.

Our first ‘net zero moment’ this year occurred on August 2nd at 8am. Then sadly, on Dec 22 at 2am, our curves reversed again. Just 9 days short of hitting out net zero goal for the year.

Where did all that solar go?

Of the 7,945 kWh we generated in 2019, we only used used 32% ourselves. The other 68% we sold back to the grid at a greatly reduced price. We’ve tried various strategies to consume energy when the sun is shining, but the largest energy consumers, hot water and heat, don’t amend themselves easily to this type of use.

I track our net energy use by the calendar year since we moved in Jan 1, 2012. But the electric company tracks our yearly solar anniversary in June. Although we didn’t net out Jan to Jan, we did still produce more power June to June. This year we sold roughly 734 kWh back to the grid and earned $25.74, about $0.035/kWh from the power company.

National Grid does not tell us how much electricity would cost if we bought it from them. They only do that if you actually use more electricity than you generate. So I have to go to the NYSEDA website to find the state averages. Using their data, we would have paid about $10,555 over the past 8 years for the 57,510 kWh we’ve used if we didn’t have solar. Our solar cost $14,320 to purchase in 2011. In very simple terms that puts us at about 74% payback. At our current rate of use and the trending price of power, it will take us another 3 years to break even in simple terms.

Now the thick black curve showing the start of the 2019-20 season is shaping up to be second only to last year. We turned on the heat November 5th, later than last year. Since we are a passive solar house I also wanted to look at how sunny it was this last quarter so I pulled together a chart showing solar (proxy for solar heat gain, except when covered by snow), heating degree days (HDD) and ASHP energy usage.

In general, despite the HDD days being only slightly lower than last year, we required a little less heat due to the increased solar gain.

The divergence of the HDD and solar lines in 2019, is only slightly larger than 2014. In general, the higher the HDD the more heat required, but solar heat gain can lower our heat energy requirement as it did in 2012, 13, 16 and 17.

Last year I started showing our ASHP usage broken down by temperature buckets. The chart below shows 2019 in comparison to 2018. We had a lot more usage in the lower temperature ranges, with less in the higher ranges.

The following chart tells me the ASHP was working a little less efficiently than the previous 7 years. This chart plots HDD vs kWh used over the last 7 years, using yearly data. Will have to keep an eye on it.

Hope everyone had an awesome 2019, because 2020 will be very different.

You can see heat maps and detailed charts of temperature and electrical usage at netplusdesign.com. View hourly, daily and monthly values for solar, usage, net usage, temperatures and HDD. 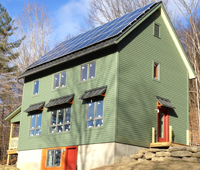